SALT LAKE CITY — Police said Tuesday they were still trying to figure out the motive of a man who allegedly kidnapped another man inside the building that houses the Utah headquarters of the FBI.

Investigators believe, however, that the 61-year-old man allegedly taken hostage at knifepoint by 41-year-old Robert Hibbard was chosen at random.

"Every indication is at this point, the victim did not know the suspect and it was a random encounter," said Salt Lake Police Sgt. Shawn Josephson.

Hibbard was arrested after taking the man to the 12th floor of the 257 Tower office building at 257 E. 200 South. The 12th floor is the FBI headquarters. When he stepped off the elevator, he was confronted by an FBI agent who took Hibbard into custody without further incident, Josephson said.

He was booked into the Salt Lake County Jail for investigation of aggravated kidnapping.

Hibbard entered the building about 5 p.m. Monday. There are several businesses in the complex. He made his way by elevator to the 6th floor, Josephson said, where he kidnapped his victim. Hibbard told his victim, "This is a hostage situation," according to a Salt Lake County Jail report. The victim worked in the building.

There was enough commotion when the man was abducted that several people called 911. Police say Hibbard made several loud statements. 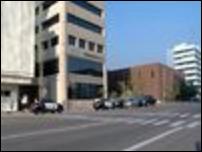 Man arrested at FBI office after pulling knife in elevator

Police are investigating a man's motive for holding another man at knifepoint in an elevator of an office building Tuesday. He was apprehended after he stepped off the elevator into the lobby of the FBI office in the building.

"Something that would cause people to take notice," Josephson said, while declining to say exactly what the comments were because of the ongoing investigation.

From there, Hibbard and his hostage went floor-to-floor before finally being arrested on the 12th floor, Josephson said. "We're still looking into why he picked that floor."

Early indications, he said, were that Hibbard was not targeting the FBI.

"There's no indication he was upset at the FBI or their floor. We don't know if he was looking for them, or what the circumstances were," Josephson said. "None of the things (he said) indicated he was upset or retaliation."

Likewise, he said there was still no clear indication Tuesday of what Hibbard hoped to accomplish or what his ultimate goal was.

Utah court records show Hibbard was found guilty of two counts misdemeanor forcible sexual abuse in 2002. One of the charges was amended from a first degree felony to a class A misdemeanor. He was sentenced to two years in jail. In 2006, he was convicted of simple assault and intoxication, according to court records, both misdemeanors.