Injuries from fatal crash may prevent charges for drunk driver

MONTICELLO — San Juan County prosecutors say they may not be able to pursue criminal charges against an Arizona man accused of killing another man in a drunk-driving crash.

But in court records filed earlier this month, San Juan County Attorney Craig Halls wrote it may be impossible to prosecute Yazzie because of the lasting injuries he suffered in the April 21 crash that killed Filemon "Phil" Montoya of Sweetwater, Texas.

"The current reports that have been shared with us indicate that (Yazzie's) memory is impaired, his problem-solving skills are impaired and his safety awareness is impaired," Halls wrote in a motion to recall a $15,000 warrant for Yazzie's arrest.

The reports Halls referred to were provided to the county attorney be Yazzie's ex-wife, who is currently caring for him, court records show. Desiree Yazzie told the prosecutor she was working to set up a neurological exam for her ex-husband.

"It is the position of the county attorney's office that (Yazzie) not be arrested and brought back to San Juan County on a warrant until we can get further information with regard to his neurological function," Halls wrote. 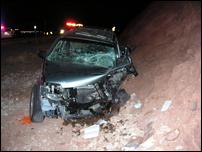 An Arizona man was drunk and driving a stolen car when he killed another driver in a head-on crash south of Moab in April, according San Juan County prosecutors.

If the injury to Yazzie's brain diminishes his ability to understand the charges against him and his ability to assist his attorney in his own defense to a certain degree, it would render him incompetent to stand trial.

Yazzie left a restaurant on April 21 without paying for his meal, stole a car and was "fleeing from Moab" when he slammed into a sport utility vehicle about 15 miles south of town on state Route 191, according to charging documents.

Montoya, 57, was the driver of the SUV and died in the crash.

Tests showed Yazzie had a blood-alcohol content of 0.21, nearly three times the legal limit in Utah of 0.08, the charges state.

Yazzie spent an extensive amount of time in a Salt Lake hospital. Prosecutors sought a warrant for his arrest in July, telling Judge Lyle Anderson in court papers that they feared Yazzie would flee the state when he was released from the hospital.

But Desiree Yazzie told prosecutors earlier this month that she is trying to get her ex-husband into an extended care facility because he "cannot stand on his own" and is "unable to take care of bodily functions on his own," Halls wrote.

Anderson agreed to recall the arrest warrant. Halls asked the court to revisit the issue in six months, at which point he hoped to know whether to dismiss the charges or move forward with the case.