SALT LAKE CITY — Contenders in the Salt Lake County mayoral race faced off in a debate Friday morning, but sparks didn't fly until Republican Mark Crockett and Democrat Ben McAdams were allowed to ask each other questions.

McAdams asked Crockett whether he is willing to work cooperatively across the aisle, insinuating that the former Salt Lake County Council member has a history of "making people upset."

Crockett said McAdams was not fairly representing his reputation and said McAdams has no history of working with taxpayers.

"The only people who are in the room when you're having those conversations and when you're all getting along are other politicians," Crockett said. "There's one person who's missing in that meeting every time, and that's the taxpayer."

Crockett countered: "What have you ever actually led?"

McAdams rattled off a list of his experiences, including church leadership, his work in a law firm, the Utah State Senate and his consulting job with Salt Lake City.

"I was hired by Salt Lake City to bring a business perspective to government," he said. "I've led initiatives that have been written up and talked about throughout our community."

I was hired by Salt Lake City to bring a business perspective to government. I've led initiatives that have been written up and talked about throughout our community.

The Utah League of Cities and Towns sponsored the debate, and the modest crowd was made up mostly of those attending the league's convention.

Of the issues addressed, discussion dwelled longest on the first subject presented in the debate: the future of Salt Lake County's unincorporated communities.

The question came on the heels of a controversy surrounding Thursday night's town hall meeting regarding Millcreek's push to incorporate.

Crockett spoke at the event, while McAdams said his invitation was rescinded when he said he would not speak specifically in favor of incorporation.

The McAdams campaign issued a statement Thursday night saying decisions regarding incorporation should lie with Millcreek residents and not county leadership.

Millcreek's campaign was brought up during the debate when McAdams said he was disappointed to see his opponent "picking a side."

Crockett rebutted that he wasn't picking sides but was offering his opinion that it is in Millcreek's best interest to incorporate. 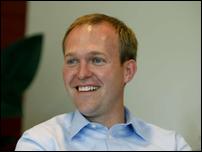 Ben McAdams' campaign for Salt Lake County mayor got a fundraising boost Monday, thanks to a visit from former President Bill Clinton.

Crockett and McAdams agreed that the county should take a role in helping different areas communicate and coordinate services, such as snowplow and ambulance service, in order to cut costs and better serve residents.

They also agreed on making clean air initiatives a priority, while disagreeing on the SkiLink proposal to connect the Canyons and Solitude resorts with a gondola system. The project would incorporate some oversight from the federal government.

Crockett said pursuing SkiLink would benefit residents and secure backcountry areas for the state, while McAdams said the proposal has been made without sufficient public engagement.

The candidates also differed on the issue of mass transit. McAdams said the county and state need to prepare for expansions to mass transit that will serve a growing population, while Crockett said road maintenance should not be ignored in a rush to construct transit options while trains run empty.

Following the debate, Crockett said he believes he has a slight lead in the race.

"The more we talk about issues, the more votes swing our way," he said.