WASHINGTON — A report released Thursday by the National Wildlife Federation points to scorching wildfires, extreme heat, fish kills and ruined crops brought on by the choke hold climate change has had on the United States this summer.

"Ruined Summer: How Climate Change Scorched the Nation in 2012" details what it characterizes as dramatic and extreme weather events that have dominated the landscape — from July being the warmest month on record to the more than 113 million people in the U.S. living under "heat advisories" in late June.

"Unfortunately, hot summers like this will occur much more frequently in years ahead," the report states. "If we don't enact the solutions we have on hand to reduce carbon pollution, wildlife, people and our summers will suffer."

The effects play out in a number of ways, including high nighttime temperatures and increased humidity that lead to greater chance of heat-related illnesses, the report said.

Those hot and sunny days that persist with no wind provide an ideal incubator for the development of ground-level ozone, which increases risks of heart attacks, strokes and complications with asthma. 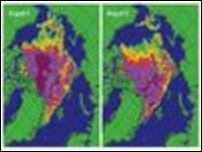 The poles really are melting, and fast

While the U.S is experience a drought and heat wave that have hotter than in many years, the Earth's poles are sweating as well. Arctic ice is melting at near-record rates and the Antarctic is as warm as at any time in the past 12,000 years.

In much of the country, the Centers for Disease Control and Prevention urged the public this year to be mindful of incidences of mosquito-borne West Nile virus, which had caused infections in birds in 43 states and resulted in 26 human deaths.

Financial impacts, the publication stresses, continue to escalate and will play out in years to come in terms of crop production and effects on people's livelihoods. In Michigan, for example, cherry crop production is anticipated to be down to only 2 million pounds, compared with 135 million pounds in 2010, according to the report.

The report noted that fruit crops were lulled to an early blossoming season by a warm March, only to be nearly wiped out by sudden freezes a month later. Apples, peaches and juice grapes were also hurt by the wild swings in temperatures.

Then came the drought of the summer, with overall costs that have yet to be tallied for producers and the agriculture industry.

"But even Americans outside the drought-stricken range will feel the effects, especially in their pocketbooks," the report notes. "As our corn withers, the resulting scarcity is expected to increase pork, beef, egg and dairy prices by up to 5 percent in the months ahead."

The season's endless pace of wildfires that have scorched much of the country are emphasized in the report, as well as thousands of fish killed by unusually "hot" water brought on by spiking temperatures. Such fish kills were reported in Michigan, Minnesota, Pennsylvania, Wisconsin, Indiana and Illinois.

"Fish are up a creek without a paddle when the water gets too warm," said Doug Inkley, a biologist with the National Wildlife Federation. "They are important to the overall health of stream ecosystems, which are suffering in the extreme heat."

The report warns this summer is a harbinger of longer-term consequences.

"Heat waves, warming water, floods, droughts, wildfires and insect and pest infestations are the new reality of an ever warming world," the report states.