SALT LAKE CITY — Utah students continue to outrank peer states in ACT test scores, but a record number of test-takers has caused average scores to drop in the state and around the country.

In the U.S., 60 percent of graduating seniors who took the test met two or fewer of ACT's four college- and career-readiness benchmarks, according to an annual report released Wednesday by ACT. Twenty-eight percent of students failed to meet any of the benchmarks, compared with 25 percent who met all four.

Those figures come after a year of record participation, with 52 percent of the country's graduating class taking the test.

"Far too many high school graduates are still falling short academically," ACT chief executive officer Jon Whitmore said in a prepared statement. "We need to do more to ensure that our young people improve."

Utah's scores ranked second behind Illinois and tied with North Dakota when compared to the 10 states where more than 95 percent of students took the test, according to the report. An additional 7,674 Utah students took the ACT in 2012, raising the percentage of students from 73 percent to 97 percent, thanks in part to a State Office of Education pilot program that funded the use of the ACT as an assessment for high school students. 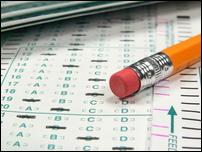 13 students get top score on ACT

Taking college admission tests such as the ACT may be one of the most stressful experiences faced by high school students preparing for college.

Judy Park, associate superintendent for the State Office of Education, said a drop in scores is to be expected as more students take the test. She said the office of education is encouraged by how little scores fell compared to the number of additional test-takers.

"We're thrilled and pleased that the decrease is as small as it is and compared to other states we've done very well," she said.

According to the report, Utah students fall below the national average for the ACT college-readiness benchmarks in English, mathematics and science. But Park said the better comparison lies in the 10 states with high participation, since high-performing and college-bound students typically self-select to take the ACT.

Education officials will continue working with the Legislature to secure funding to use the ACT as a high school assessment, Park said. With nearly all graduating seniors taking the test, she said the scores are more indicative of Utah's population and allow an opportunity for the state to track progress with the implementation of new college- and career-ready standards like the Utah Core.

"Now that we have these scores, we'll be able to monitor improvement," she said. "We strongly believe that as we move forward with those standards, we'll see our ACT scores improve."

State superintendent Larry Shumway was also pleased with Utah's performance among states with programs where all students take the ACT. Utah outperformed peer states like Colorado and Wyoming, he said in a prepared statement, as well as nearly matching Illinois where all students have taken the ACT since 2008.

"These are great results," he said. "Our hope is that greater student participation in the ACT will lead to more students seriously considering post-secondary training whether in a university or vocational college setting."