Warning: Some content may be considered graphic.SALT LAKE CITY — The woman struggled to speak through the shaking. And when the words came out, they were forced out over quick, sputtering breaths.

She appeared to be hyperventilating and began sobbing even before she took the witness stand Tuesday to testify against Gregory Nathan Peterson, 37. When she referred to the man, she simply called him "the monster."

"I don't remember times," she said, referring to repeated sexual abuse during the first night after he'd allegedly kidnapped her. "It happened over and over. He would flip me however he wanted. ... I never (got) to sleep. It was a night of torture."

She was one of three women who testified Tuesday at a preliminary hearing for the businessman and Republican activist charged with raping, kidnapping or sexually abusing women he was dating.

In testimony Tuesday the woman said she became acquainted with the Orem man on Facebook in June and they messaged back and forth several times until he invited her to a barbecue at his cabin in Heber City. She said they took a few pictures together and said almost nothing during the July 1, 2011, event, but he contacted her the next day and asked her to go to a movie with him.

When they arrived at the theater, she saw three friends there and asked Peterson if they could go see the same movie. She said he became "aggressive" and told her it was a date and that they would go to their own movie. Peterson, she testified, first became physical with her in the theater.

"He was all sexual," she recalled, struggling to speak clearly through quick, short breaths. "He would put his hands in between my legs and kept pulling me toward him."

"He said that he was a powerful politician and that he checked my status and that I was (here) illegally," she testified, adding that Peterson told her that he had a weapon and showed her a box in his car where he said he kept the gun.

Soon after, she said, he decided the movie was boring and told the woman he wanted to leave to go eat. She indicated it was late.

"He said that he was a powerful politician and that he checked my status and that I was (here) illegally," she testified, adding that Peterson told her that he had a weapon and showed her a box in his car where he said he kept the gun. "He said he had a weapon because he was a good man, and the only person I could trust was him from now on."

Peterson then drove her to his cabin in Heber City, where he forced her to watch a movie about Brazil that emphasized crime, she testified. He told her that her home country was "garbage" before he began touching her and calling her "all the nasty words he could think of," she said.

"I was trying to hold myself and my clothes," she testified. "He said he wasn't going to rape me."

Peterson eventually exposed himself to her and sexually abused her multiple times, she said.

"He would flip me over and would change positions like I was an object and he could do whatever he wanted," she said. "I was afraid of his aggression and violence."

The woman said Peterson wouldn't take her home and told her she needed to accompany him to his mother's house, where she would help his mother with a project without pay "because I was here illegally." She said the man made her touch him while they were driving. 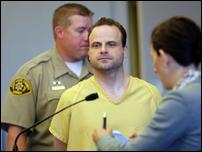 Since his arrest last week, three additional women have stepped forward to accuse Gregory Peterson of attacking them, according to investigators.

The abuse continued after they arrived at Peterson's mother's Cache County home in Lewiston, where they stayed from July 3 to July 5, she said. The woman attended a Fourth of July parade there and did the work Peterson asked her to do.

She accompanied Peterson numerous places without trying to run or cry for help because he threatened to have her deported, she said. He told her he could make her "disappear" and she believed him because of "all the sexual abuse, the violence, the way he forced me to do things."

She said she tried to get help from a friend she saw at the parade, but didn't know the address of the mother's home. Peterson heard her try to give the location to her friend, she said, and Peterson got angry.

He ultimately took her home on July 5.

"I was exhausted from everything," she testified. "I just wanted to go to sleep. It was a nightmare."

The woman would not look at Peterson during Tuesday's preliminary hearing, at times shielding her eyes with her hand as she sobbed. Peterson was animated and talkative as he talked with his attorneys almost the entire time she spoke — his face and gestures ranging from incredulous to skeptical to dismissive. At one point, he interrupted a prosecutor who was trying to clarify what the witness was saying.

"Let her speak for herself," he interjected.

Two other women also testified and both said they met Peterson on the dating website LDSSingles.com. One woman said she agreed to a date on April 21, 2012, because of Peterson's profile.

"His online profile looked great," she said. "He looked like a great catch, he was clean-cut. … He had what I was looking for. He looked like a good member of The Church of Jesus Christ of Latter-day Saints. He had a temple recommend, which was important to me. He served a mission."

The two went to lunch at Trolley Square and the date ended within an hour. When she told him she had plans, she said he appeared to get angry and abruptly left. He approached her at her car and apologized, then asked to stop by her home, which he knew was in the area. She said she considered just driving away, but Peterson was right behind her.

She opened the door to let him in and said he immediately took her hand and led her to the bedroom.

"Everything was unusual about that," she said. "Where was he going? It just took me off guard."

She said Peterson offered to massage her legs, because she had run a half marathon earlier in the day, and told her to lay on the bed. She brushed off the invitation, but said Peterson was "persistent." She testified that when she did lay down on her stomach, he laid on top of her, put his hand on her head and started touching her bottom and chest.

"(It was) just complete shock," she said. "I keep saying no and I know that I've got to get away. … I managed to push him off of me with my hands."

She said she then noticed that Peterson was exposing himself to her. When she asked him what he was doing, she said he replied: "I just wanted you to see this."

She asked him to leave, but he said he first wanted a glass of water, which she gave him.

"I was frightened," she said. "I wasn't sure what he was capable of doing so I tried to remain calm and not get too angry."

She testified that she didn't contact police immediately, because she thought she had to be raped in order to do so. She later talked with an officer over the phone about what happened.

Another woman testified that she was encouraged by the fact that Peterson said he was a member of the LDS Church who attended church regularly. She agreed to a date and they went to dinner at Thanksgiving Point on Dec. 10, 2011, and drove around to look at Christmas lights.

They then decided to go to a movie and drove to Orem. She testified that Peterson offered to show her his office building and kissed her there. He kissed her again after the movie and again at the end of the date, when they agreed to go out again.

The next day, Peterson called and they planned to meet for lunch at her West Jordan home. She said Peterson arrived and hugged her, picking her up and carrying her immediately to the couch in her living room.

I was scared," she said. "I felt really stupid that I let him into my house."

She started to cry as she described how Peterson got on top of her.

"I was scared," she said. "I felt really stupid that I let him into my house. I told him to let me up and I tried to turn over so he would get off of me, but he didn't."

She said the man pulled up her skirt and shirt and touched her. She said she told him to stop multiple times and he eventually did, but refused to leave until they had lunch.

She later went to a hospital for an exam and hesitated to tell the victim's advocate what had occurred.

She told police a few days later, however, and indicated that she wanted to press charges. She said she had to call multiple times before a West Jordan police detective called back in February and discouraged her from pursuing charges, telling her it would be her word against Peterson's.

"I didn't think the police would do anything about it," she said. "It had taken them two months to call me so I figured it wouldn't do any good. I told them not to press charges."

She said she later suffered from nightmares and panic attacks.

Peterson's attorneys have been adamant that he is innocent. The preliminary hearing is scheduled to continue through Wednesday, at which time Judge Judith Atherton will determine if there is sufficient evidence to order Peterson to stand trial on the charges against him.

A new charge was filed against Peterson Monday. The Wasatch County Attorney's Office charged him with forcible sex abuse, a second-degree felony. That incident allegedly happened in the spring of 2010.

He will have an initial appearance on that charge Aug. 29. He is currently being held in the Salt Lake County Jail on $750,000 bail.