HERRIMAN — Fast-moving wildfires, smoke and ash pollution, forced evacuation and even flooding fears are a few of the things Herriman and Eagle Mountain residents have endured this summer.

The Pinyon Fire burning at Camp Williams has burned 6,300 acres and still eludes fire containment lines. The fire is at 10 percent containment and burns on Camp Williams' property, and has forced some Eagle Mountain residents to evacuate earlier this week.

Julie Richards, a Herriman resident, spent part of the day watching helicopters pick up water near her back yard — again.

"You'd think that it would be like lightning, that it would strike once and you'd be done and we'd be good for another five, six years," Richards said.

In late June, the Dump Fire broke out, also prompting mandatory evacuations. A few days later, the Rose Crest fire forced residents out of their homes in Herriman

Some in Herriman had been through it all before two years ago, when the Machine Gun Fire, also on Camp Williams property, broke out. Several homes caught fire at that time. 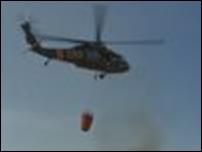 Fires more easily contained as a result of 'chaining' technique

In comparison to other blazes this fire season that have devoured tens of thousands of Utah acres, the Atchinson Fire could easily be considered small and sincere, and that's partially by design and partially a "happy accident."

"Anytime you live in an urban interface, you're going to have fire eventually," said Jason Curry of the Division of Forestry, Fire and State Lands.

He calls it a fluke that this spot became a wildfire target this year.

Richards says that the people in her neighborhood have become very close because of the fires, and in situations like this, they check up on each other.

"I think we're coming together as a community, as a neighborhood and I think that's good," Richards said.

Many in the area say they have emergency 72-hour kits or "go-bags" in their house or garages in case of evacuation.