SALT LAKE CITY — A new political attack ad is pulling the death card in its siege on Mitt Romney, a move that has even some seasoned strategists saying the rhetoric of presidential politics has crossed the line.

The ad, rolled out by the Obama-backing super PAC Priorities USA Action, features a steel worker who says he had his plant closed by Romney and Bain Capital, he lost his health insurance, and that his wife contracted cancer and then she died. 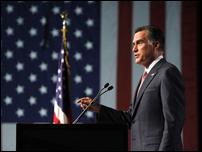 The latest assault by Senate Majority Leader Harry Reid, who said Romney did not pay taxes for a 10-year period, has many questioning the validity of his claims.

Soptic contends his wife "maybe didn't say anything because she knew [they] couldn't afford the insurance." She grew ill, he says, and died 22 days after an eventual trip to the hospital.

"Anytime you start bringing things up where you're scaring people - either by trying to link someone's death or safety and national security (referencing a recent anti-Obama attack ad) - you're pushing the envelope of good taste," Luke said. "What it shows me is this is the new direction of American political advertising."

Luke said the U.S. Supreme Court ruling in Citizens United v. Federal Election Commission in favor of independent political expenditures by corporations and unions opened the door to greater liberties in the ads.

Anytime you start bringing things up where you're scaring people - either by trying to link someone's death or safety and national security ... you're pushing the envelope of good taste." -Charlie Luke, political strategist

Luke maintains more regulation is needed, though he acknowledged even this ad is part of a greater game of strategy in luring undecided voters to one side or another.

"The ads we're going to start seeing are going to try to tap into those very few undecided [voters] in very few states, so we'll see more of this," Luke said.

University of Utah associate professor of political science Thad Hall said the ad certainly did not appear to have an accidental effect and likely was the result of research with focus groups on what topics resonate best with undecided voters.

Hall said Romney's involvement with Bain Capital has registered with a number of those people.

Romney spokesman Ryan Williams issued a response to Politico regarding the ad, suggesting it was a distraction from President Obama's economic record.