Ridge Fire determined to be human-caused

Ridge Fire determined to be human-caused

LAYTON — Officials believe the Ridge Fire, which briefly forced the evacuation of about 30 homes over the weekend, was human caused.

Originally, it was reported that the fire may have been caused by lightning.

Although investigators don't know exactly how the fire started, Pollock said all other possibilities have been looked at and discounted.

As of 10 p.m. Sunday, the fire was 100 percent contained and was expected to be fully under control by Tuesday afternoon. The fire, which started just after 6 p.m. Saturday, burned less than 50 acres. But it threatened about 30 homes that had to be temporarily evacuated. 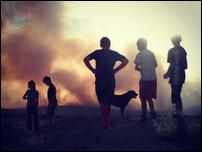 A wildfire that started at Camp Williams has crossed the Utah National Guard training site's southern border and is threatening homes in Eagle Mountain.

More firesMeanwhile, a handful other lightning-caused fires continued to burn throughout the state Monday.

The Pyramid Fire near Enterprise, Washington County, has burned 51 acres since starting just before 5 p.m. Sunday. The fire was 80 percent contained as of 7 p.m. Monday.

The Pumpkin Fire east of Spanish Fork was 40 percent contained Sunday. The fire has burned roughly 175 acres. No update was available Monday.