GRANTSVILLE — The young victim of a rattlesnake bite and his family are telling their story, in hopes of warning other families of what they believe is an added danger in this drought year: more predatory animals — including rattlers — are coming down from the hills in search of food and are winding up in neighborhoods.

9-year-old Tyler Perry was looking on July 13 for a pheasant that had escaped its pen in his family's back yard in Grantsville, and he found a hole — the opening of an old irrigation pipe just beyond a fence.

"I bent down to look for the pheasant in the hole and I got bit by a rattlesnake," Perry told KSL.

Not sure at first what bit him, Perry ran back to the house. His parents feared the worst and called 911. Perry was quickly transported to Mountain West Medical Center in Tooele, and subsequently Primary Children's Medical Center in Salt Lake City.

All of the doctors that looked at it said that we were really lucky,

"All of the doctors that looked at it said that we were really lucky," Tyler's mom, Michelle Perry, said. "They thought it could have been just a dry bite."

Dry bite or not, Tyler suffered significant swelling in his arm, just above his elbow. Because of the swift treatment, his arm looked as it should Monday — more than two weeks after the snake encounter.

The family wants other families to be on watch for venomous snakes. Michelle and her husband, Jared, believe last year's wet winter significantly boosted the population of voles and other rodents. When the conditions turned extremely dry this year, the family contends the pests moved into neighborhoods to find food and water.

"And with that — [the rodents are] the rattlesnakes' and snakes' food source, so they've come closer to our house," Michelle Perry said. 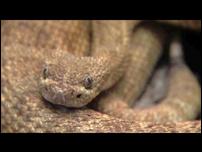 Rattlesnakes are causing a big scare for several neighborhoods along the Wasatch Front.

Grantsville Police Lt. Steve Barrett appeared to be in agreement with the family over the source of increased wildlife calls within city boundaries.

"I haven't had a badger call in probably five years and this year we've had five," Barrett said.

Barrett said there are more snakes, too — though not all are venomous. He said caution is warranted.

"If you're sticking your arms down and your hands down and underneath boards or planks or in pipes - where they shouldn't be — look first, because there's definitely a possibility that something's going to be there," Barrett said.

Police urge people if they do get snake bites they suspect are venomous to get to the emergency room as soon as possible, and to get away from snakes they spot and let police or animal control handle the situation.