SALT LAKE CITY — A new study has found a strong link between climate change and wildfire.

It appears to explain long-term changes in the frequency of fire over many centuries, and it may explain what's been happening in the West in recent years.

"Climate ultimately drives fire," said Mitchell Power, assistant professor of geography at the University of Utah and curator of the Garrett Herbarium at the Natural History Museum of Utah.

Power is lead author of the new study which explored lake-bottom sediments in hundreds of locations around the world.

The 20 scientists involved in the project concluded that there were fewer fires following the onset of a global cooling trend hundreds of years ago. Conversely, there were more fires after the trend reversed into a period of global warming.

"Our climate is the primary controller of fire, and so we have seen this in the last decade," Power said. "Temperatures have warmed. We're seeing more fires. We're seeing a longer fire season."

Our climate is the primary controller of fire, and so we have seen this in the last decade,

Power's involvement in the studies stems from his curiosity after the Milford Flat Fire devastated more than 300,000 acres in western Utah in 2007. He wondered how often big fires like that happen.

He now has collected a library of clues, core samples of sediments extracted from lake bottoms in North America and South America. He collected many samples from Spring Lake in Millard County near Milford Flat. He also obtained data samples extracted by other scientists in 600 lakes throughout the world.

The evidence in the core samples is microscopic bits of charcoal that wash or blow into lakes. Power studied charcoal in sediments deposited over 2,000 years. The study found a strong correlation between the frequency of wildfires and long-term climate trends, particularly during and after the so-called Little Ice Age, named for a period of cooling several hundred years ago.

"When the atmosphere warms up and we have a century or more of warming, we get more fire," Power said. "When things cool down, we get less fire."

That may seem obvious, but it undercuts a rival theory.

Scientists already knew fires declined in the Americas after the Little Ice Age set in. But a previous theory blamed the decline in fire on a devastating population collapse that took place after Columbus arrived in 1492. The Europeans who followed Columbus brought diseases that drastically reduced Native American populations. Previous scholars have suggested the population collapse led to a sharp decline in agricultural burning. That would have lowered the amount of charcoal in corresponding sediment layers in lake bottoms. 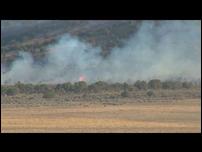 Firefighters in Millard County were busy fighting wildfire Friday night that burned about a thousand acres. It started with a lightning strike, and then grew quickly.

Power's study refutes that theory. It found that the decline in fires was not confined to the Americas. "The rest of the world also shows evidence of decreased fire and cooling," Power said.

The decline in fires also was earlier than could be explained by the population collapse. "Before Columbus came, before any of the Spaniards arrived, before diseases spread, this began as early as about 1350 A.D.," Power said. "There's a really strong coupling of temperature and fire, and this was under way well before this demographic collapse."

He believes the upsurge of wildfires in recent years is linked to a globally documented increase in temperatures. Warming trends play a role in drying out fuels and making them more explosive. Another factor appears to be increased air convection; a warmer climate has more thunderstorms and that can mean more lightning-caused fires.