SALT LAKE CITY - An obituary is one of the last opportunities people have to hear about who you were after you die. It's the final word; it's the last chance.

Val Patterson's obituary is written much like his life was spent.

Funny, brilliant, touching — with a hint of rebellion, and even some sarcasm, Patterson's obituary reflects the qualities of what his life was: an experience. And now, even though he has passed away, we still have the opportunity to live vicariously through his wild ride.

At 59 years old, the Salt Lake City native lost his battle with throat cancer last week. Last fall, he decided to craft his own obituary, and began by confessing to a crime.

As it turns out, I AM the guy who stole the safe from the Motor View Drive Inn back in June, 1971. I could have left that unsaid, but I wanted to get it off my chest.

Al Taylor, a KSL employee, provided Patterson's voice at the reading of what quickly became a very interesting and enlightening obituary.

"As it turns out, I AM the guy who stole the safe from the Motor View Drive Inn back in June, 1971," Taylor read. "I could have left that unsaid, but I wanted to get it off my chest."

It didn't stop there.

"Now to that really mean Park Ranger; after all, it was me that rolled those rocks into your geyser and ruined it. I did notice a few years later that you did get Old Faithful working again."

The hits kept coming. Patterson went on at length to describe his years of debauchery.

"To Disneyland: You can now throw away that "Banned for Life" file you have on me, I'm not a problem anymore — and SeaWorld San Diego, too, if you read this." 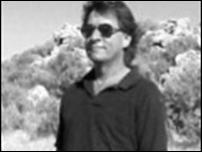 Want to read Val Patterson's obituary in its entirety? Click the link above.

In addition to his extra-curricular exploits, Patterson felt the need in his first-person obituary to explain to his family, friends and colleagues that he never actually received a Ph.D from the University of Utah. He says it was a mix-up, and the university sent him the wrong degree. He goes on to admit that he never actually knew what the letters P-H-D stand for.

Patterson's wife attested to the truthfulness of every word of the document — including a confession at the end, saying some of his youthful invincibility was his only regret. Patterson was a smoker and felt it had cut his life short.

"Now, to make it worse, I have robbed my beloved Mary Jane of a decade or more of the two of us growing old together," Taylor read.

Patterson and his wife were married 33 years. There will be a private celebration of life this weekend. Many people have written online that they wish they would have known Patterson.

Perhaps this obituary was written in such a way that we all can.