One of the most threatening fires was the Clay Springs Fire that started Wednesday. As of 1:30 p.m., the fire had burned 30,000 acres with zero percent containment. One cabin and three maintenance sheds in Oak City were destroyed by the fire and another 100 structures were threatened, according fire officials.

The fire forced about 850 people in Oak City and Fool Creek to flee their homes under a mandatory evacuation order. A shelter for evacuees is set up at an LDS stake center in Delta, 130 White Sage Ave.

Residents of Oak City were told, however, they could return to their homes at 10 a.m. Thursday.

Portions of Highway 125 remained closed Thursday. Two people were reportedly treated for second-degree burns, though it was not immediately clear how they were injured.

The New Harmony Fire had burned about 2,000 acres and was 60 percent contained Thursday morning. Most of the fire is burning west of I-15. Eight structures were destroyed, one vehicle was damaged and other homes and structures were threatened. 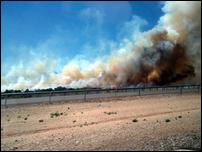 Multiple fires have been reported in central and southern Utah, with structures and communities in danger.

Interstate 15 and Old Highway 91 were open Thursday morning. State Route 144 is restricted to local residents only.

The fire, which started just before 2 p.m. Wednesday, is believed to be human caused.

Evacuations were still in effect for the Bumblebee Ridge subdivision and all areas north of New Harmony and south of Vandenberg Road, west of I-15. Kanarraville (east of I-15) and New Harmony evacuations have been lifted.

The Church Camp Fire near Duchesne that has been burning since Sunday has consumed 6,200 acres as of Thursday morning and was estimated to be 5 percent contained.

Fireworks were being blamed for starting the Pole Creek Fire on Wednesday near Neola, Duchesne County. The fire had burned 1,342 acres as of Thursday with zero percent containment.

Evacuations were still in effect Thursday for the massive Wood Hollow Fire, which had burned more than 70 square miles. More than 45,300 acres had burned as of Thursday morning with an estimated 20 percent containment. Officials said Thursday they expected full containment by Saturday.

New fireworks restrictions in place for many cities

The recent fires have made for dangerous conditions in Utah. Considering the upcoming Independence Day and Pioneer Day holidays, fireworks restrictions have been put in place for several cities around the state.

The sheriff's office believes at least 56 structures were burned, including primary residences, but have not had time to compile an accurate count as of Thursday morning.

One person was found dead in the evacuated area. The identity of that person found in Elk Ridge had not been released as of Thursday morning, but officials said they had made a tentative identification on him.

One theory officials were looking at as to what started the fire was copper thieves stripping wire, causing power lines to spark the blaze.

The Red Cross said the shelter openede at Northpete High School in Mt. Pleasant when Fairview was evacuated will remain open.

The Seeley Fire has forced the evacuations of the Carbon County towns of Scofield and Clear Creek, in addition to areas such as Gentry Mountain, North Skyline Drive and the area north of Millers Flat, were all evacuated.

The fire had burned an estimated 15,000 acres as of Thursday morning with zero percent containment. No structures were immediately threatened, but campgrounds in the area have been shut down.

The Red Cross set up a shelter at an LDS wardhouse in Wellington, 930 E. Main.

The fire jumped state Route 31 in Huntington Canyon and made a run up Gentry Mountain late Tuesday, fire officials said.

A lightning strike was believed to have started the fire Saturday afternoon.