MANILA, Daggett County — Commissioners have identified a parcel of land within the Flaming Gorge National Recreation Area where they'd like to see commercial development take place.

The 400-acre tract near Linwood Bay on the northwest shore of Flaming Gorge was selected by a 2-1 vote Tuesday.

Commissioner Warren Blanchard cast the sole dissenting vote, but said he did so only because a quick poll of his constituents showed that most didn't support the selection of Linwood Bay.

"I really hated to say no to that vote, but I am because you guys voted me in," Blanchard said.

The county is facing the loss of nearly $400,000 in federal money next year, so officials are seeking a land swap between the U.S. Forest Service and the school trust lands agency that could allow private development to take place within the Flaming Gorge National Recreation Area.

Such a transaction requires congressional action and Utah's congressional delegation is eager to get the process started, said Kevin Carter, executive director of the Utah School and Institutional Trust Lands Administration.

Carter was in Washington recently and briefed Utah's congressional representatives on the proposal, which he said was warmly received, particularly by Rep. Rob Bishop and Sen. Orrin Hatch, both Republicans.

"They're very anxious to move forward and do something on it," he said.

County commissioners are also eager to move the process along.

We need private development somewhere on this lake to capitalize on the people that are coming up here. Without an added resort facility up here for them to visit, we're not going to survive.

"(Flaming Gorge) is a major resource for revenues for the county," said commission chairman Jerry Steglich.

"We need private development somewhere on this lake to capitalize on the people that are coming up here," he said. "Without an added resort facility up here for them to visit, we're not going to survive."

In January 2013, Daggett County will receive its final annual stipend payment associated with the 1998 privatization of Dutch John. The town was built by the federal government to house the workers who built Flaming Gorge Dam. Over the years, the yearly stipend to maintain the community has risen to about $380,000.

The selection of Linwood Bay as the site for the proposed land swap has irked some residents. It sparked heated exchanges between Steglich and resident Mike Musselman after Tuesday's vote.

"How much money have you spent entertaining this idea?" Musselman asked.

"Enough. More than we should have spent," Steglich replied, before telling Musselman to leave the commission chambers.

"Because we don't need to listen to this," the commissioner said. "We've listened to it for three months now from you. It's the same old thing, over and over again."

Musselman remained in his seat. After the meeting ended he said he's passionately opposed to any private development on the shores of Flaming Gorge. 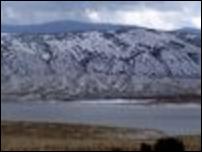 Faced with the loss of nearly $400,000 in federal money next year, Daggett County officials are seeking a land swap between the U.S. Forest Service and the state that could allow private development to take place within the Flaming Gorge National Recreation Area.

"I'm really concerned about the environmental impact that it will have on the reservoir, and the wildlife, and the beauty of our community," he said, adding that Flaming Gorge is a unique reservoir because it belongs to the public.

"You look at a lot of our recreational areas, and the wealthy own the land around the water," Musselman said. "I really don't want to see it happen here."

Other residents expressed dismay that commissioners chose Linwood Bay because it wasn't the No. 1 site identified by the Daggett County Land Exchange Selection Committee.

In February, the committee listed Mustang Ridge, on the Dutch John side of Flaming Gorge, as the top parcel for a possible swap. The 11-member committee appointed by the Daggett County Commission based its decision on criteria that included geographic location, environmental and "buildability" issues, existing infrastructure, community benefits and adverse community issues.

"The Mustang Ridge site received unanimous approval as the site having the most visual appeal and other development benefits needed to capture the attention of developers and investors," the group's report said.

Linwood Bay was the group's second choice, based on the information it was given, though at least one member now says it should have been ranked third based on a lack of available water and sewer service.

Still, commissioners decided to push Linwood Bay to the No. 1 spot Tuesday because of a management assessment released last month by the Forest Service that evaluated it against the Mustang Ridge site.

While that assessment listed the agency's concerns about development at both locations, it specifically mentioned its desire to "retain an essentially undeveloped character" for the Mustang Ridge area because it is "a prominent feature from most scenic vistas in the Gorge."

We don't get paid to make all the popular decisions, but it's the right decision. It's something that needs to get done.

The commission listened to that concern, Steglich said, and decided to go with Linwood Bay, believing it would "attract less kickback from the Forest Service."

The proposal under consideration would involve SITLA trading out about 200 acres of its property within Forest Service boundaries in exchange for like-value land around Flaming Gorge. The agency, which manages public lands granted to the state to benefit public schools, would then hold onto the property for lease to a private developer for the construction of a resort or other project.

Negotiations are extremely preliminary, Carter said, and would possibly involve the relinquishment by SITLA of land it owns in Cache County within Forest Service boundaries or in Carbon and Emery counties. The Forest Service, Carter added, has been given a list of properties to review for a possible trade.

The county does have about 2,200 acres available for development in the Dutch John area. Getting someone to purchase and build on that land is still the top priority, Steglich said.

The commissioner acknowledged that the Linwood Bay decision may not have been popular with all county residents.

"We don't get paid to make all the popular decisions," he said, "but it's the right decision. It's something that needs to get done."

Musselman has promised to pursue legal action to prevent the land swap from occurring, citing his concern that commissioners won't stop with just this trade.

"They'll continue to want another chunk every time they can't manage their budget," he said.