Community pitches in to search for boy who fell in river

Community pitches in to search for boy who fell in river

OGDEN — On an observation deck overlooking the Weber River Friday, a man kneels down and places two stuffed animals at a makeshift memorial.

The man is the great-grandfather of Corbin Anderson, a 4-year-old Layton boy who fell into the river last Saturday. Corbin fell in while his family was taking a picture together by Kayak Park, near 300 W. 24th St. His father jumped in, but he was unable to rescue the boy.

After nearly a week searching for the boy's body, Weber County swift-water rescuers and divers have had no success. A track hoe donated by E.K. Bailey, an Ogden construction company, was brought in to aid in the search by diverting the path of the river and lowering water levels for searchers. Brent Bailey, E.K. Bailey president, said he's glad he had the resources the family needed and hopes it helps.

Farther downstream, Lee Kranendonk, an attorney program manager at Hill Air Force Base, keeps his eyes trained on the river. He took vacation time to help the search and rescue team and give them "an extra set of eyes on the river."

"There's a whole bunch from Hill taking time off," he said. "Some of them are walking up and down the river. My son has been here every day."

Kranendonk is one of an army of volunteers who have searched along the Weber River for the past week, hoping to aid search and rescue efforts and bring closure to the family. 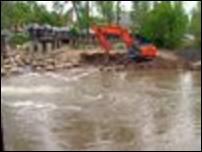 Weber River being diverted to aid in search for Layton boy

Heavy machinery is in the Weber River Thursday afternoon in an attempt to locate a young boy who fell into the water.

"I heard about it and I was upset like everybody else," said Patrick Guillen from Clearfield.

Guillen said Kayak Park at Weber River is one of his favorite spots. "This is a relaxing place," he said. Since the drowning, however, things have changed. "It's just been eerie and sad. Everybody is just hoping they can find the little boy. Everybody is feeling it, almost like it's their own child."

Ken Wagner, of Roy, was fishing on the Weber River Friday when he noticed the searchers. When Wagner learned that they were searching for Corbin, he put away his fishing pole, put on his waders and went into the river to help.

Jenny Dreeszen has a child in Corbin's brother's class and called the incident "heartbreaking."

"What a tragedy," he said. "We hope that they can find that body, so the family can find closure."

Authorities are asking people to be careful near rivers. A 12-year-old girl was swept away in the Logan River Thursday while fishing with her family, and an adult male jumped into the water to rescue her. The girl and the man were able to get out of the river safely.

"Luckily, in this case, everyone turned out to be unhurt," said Logan Assistant Fire Chief Brady Hansen, who encouraged people to use extra caution near rivers, because "rivers run deceivingly high and the water temperature is dangerously cold" this time of the year.

"We must all be vigilant in our efforts to keep safe near the water," he said.