SALT LAKE CITY — Jade Francom wishes he didn't have to see the plaque with his son's name on the Utah Law Enforcement Memorial.

"I know his girls don't want to see his name on that wall," he said Thursday.

But to have his son's name there, he said, is an honor.

On Thursday, Ogden police officer Jared Francom, 30, was honored during the annual service to remember all of Utah's fallen officers. Francom was shot and killed in the line of duty in January.

On the night of Jan. 4, a chaotic gun battle erupted as members of the Weber-Morgan Narcotics Strike Force attempted to serve a search warrant at Matthew Stewart's Ogden house. Francom and five other officers — some who arrived later as backup — were shot. Francom, who was shot six times, died the next morning as a result of his injuries.

Those wounded officers, as well as other members of the strike force and and a large showing of officers from the Ogden Police Department, were present for Thursday's service. 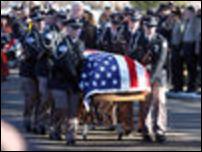 Remembering him as a man who was devoted to his family, his job and the Dallas Cowboys, friends, family members and hundreds of law enforcement officers from across Utah and the U.S. said goodbye Wednesday to Ogden police officer Jared Daniel Francom.

"Everything he did revolved around being a policeman," he said.

Travis Francom said after his brother was released from the hospital following a 1993 ATV accident, "Jared made it a goal to donate blood as much as possible" in order to help others.

By paying the ultimate price to protect and serve his community — including his wife and two young daughters — Jared Francom taught his brother the true meaning of giving, bravery, devotion and unconditional love, he said.

"Jared truly is an example to me and my life."

In closing, Travis Francom reminded all other officers to "always be on your guard."

"Don't ever let your guard down and always be prepared," he said.

Utah Gov. Gary Herbert called Thursday's memorial service "bittersweet." The community was happy for Jared Francom's service and the example he set for others, but sad as they are left now with only memories.

Francom's widow, Erin, and his parents, Jade and Shelly Francom, pressed the plaque with Jared's name onto its designated slot on a bottom corner. Following a 21-gun salute, the playing of taps and "Amazing Grace" on bagpipes, Francom's daughters — Samantha Rose and Hailey Lynn Francom — were presented with their father's purple heart.

After the ceremony, the Utah Quilt Guild presented Francom's widow and the other officers who were wounded during the shootout with quilts. The gifts were the results of people who spent hundreds of hours "stitching their love and prayers and hope" into each one, according to the group. Each quilt also included a personal letter from the quilt's maker to the individual officer for whom it was made,

"I've never been down here and been involved in hanging a plaque on this wall, fortunately. And I hope I never to be involved with that again," said Ogden Police Chief Mike Ashment, who became chief just a month ago.

Ashment said he remembered when Francom joined the department and worked his way to become a strike force member — one of Francom's main goals.

He agreed with others who said Thursday's ceremony was an occasion for both fond remembrance and sadness.

"I think it helps us to remember how important the things that we do are to this community. It refreshes our sense of how much the community supports what we do and how much they appreciate what we do. And I think coming to these things every year helps us to understand that we do have the community's support," he said. "It's unfortunate we sometimes have to lose one of those officers to get to this point."