SALT LAKE CITY — Junior Seau, a longtime professional football player, committed suicide Wednesday at the age of 43 in California. He was a pillar among the Polynesian community, and news of Seau's death saddened many across the country.

His life meant quite a lot to the culture here in Utah. Simply put, Junior Seau was a pioneer of NFL success and a charitable human being. Members of the Polynesian community have said he has, in many ways, helped create the Polynesian pipeline to football here in Utah.

In Anton Palepoi's Salt Lake City home, NFL memorabilia lines the shelves and adorns the walls. He played for six years in the league and grew up idolizing Seau.

"Junior, in my opinion, is the best Polynesian football player that's ever played the game," Palepoi said. He said the news of Seau's suicide is tragic, but that life after pro football can be even more difficult than it is to make it into the league in the first place. Health issues, both physical and mental, can take a toll.

"To be held at such a high standard and be at the top of your game," he said. "And then, all of the sudden, the lights aren't there. No more money, without the money, people fall off to the side, friends, women, some people drinking. There are a lot of things that play a big role in this." 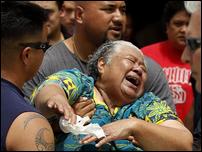 Junior Seau, a homegrown superstar who was the fist-pumping, emotional leader of the San Diego Chargers for 13 years, was found shot to death at his home Wednesday morning in what police said appeared to be a suicide. He was 43.

Tony Vainuku is a filmmaker in Salt Lake City. He's working on a project called "In Football We Trust" which documents Polynesian athletes and their drive to overcome obstacles in life and football. He said Seau was instrumental in showing young athletes of Polynesian decent those dreams were possible.

He's been a pioneer. He's crossed so many barriers for the Polynesian culture and it's taken us to a whole another level," Vainuku said.