SALT LAKE CITY — Thousands of visitors from across the country and around the world poured into Salt Lake City this weekend for the LDS Church's general conference.

And many of those visitors got their first look at the just-opened City Creek Center while they were downtown.

"I think it's nice," said Alfredo Escobar, who came from Valencia, Calif., for the Saturday afternoon session of conference. "Beautiful design, beautiful stores."

It was another huge Saturday for the 9-day-old mixed-use development. But unlike last weekend when guests came in droves wearing casual Saturday clothes, a large number of people were dressed in their Sunday best, shopping, eating and browsing between sessions of conference.

Rebecca Patterson, a greeter, handed out mall directories on South Temple. She was chatting with a family when she noticed a large crowd building across the street, waiting for the traffic signal to cross.

Men in suits, women and girls in dresses and young boys wearing ties hanging down to their knees, crossed the street. It was a wall of people — and Patterson couldn't hand out the directories fast enough.

Before, we couldn't do anything around here. It gives us a place to hang out in between sessions.

At Deseret Book, Sandra French of Yuba City, Calif., thumbed through pictures of temples, looking for San Diego and Oakland. She said she and her family try to come to general conference at least once a year, and they're glad the construction of City Creek Center is finally over.

"Every time we came to conference, it was so dark and gloomy and there were no places to eat," she said.

A smiling Deseret Book employee asked French if he could assist her with anything, then helped her find the pictures. French said after shopping, she planned on meeting with family members.

"Before, we couldn't do anything around here," she said. "It gives us a place to hang out in between sessions."

Elsewhere in the store, long lines snaked their way through bookshelves for a chance to get books signed by LDS book authors like John Bytheway and Gerald R. Lund, author of the "Work and the Glory" series.

Scott Trotter, spokesman for The Church of Jesus Christ of Latter-day Saints, estimated that 115,000 people would visit downtown during the church's two-day general conference Saturday and Sunday.

City Creek officials on Saturday said they had made preparations for the crowds and things were operating smoothly.

"We are pleased to see a broad range of shoppers in the center today. We expected this weekend to be an encore of our opening weekend in terms of shopper volume and those expectations are being realized," said Dee Brewer, marketing and sponsorship director at City Creek Center.

In the crowded food court, Mariesa Davis, who moved from Utah 15 year ago to Las Vegas, said City Creek Center is a welcome addition to downtown Salt Lake City. 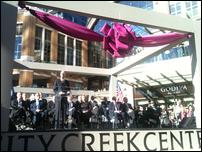 "We used to live here a long time ago, and we wouldn't come downtown because it was too much of a hassle," she said.

"This beats anything in Las Vegas," he said. "This is the best downtown revitalization project I've ever seen."

The crowds spilled out onto the streets, too. A line formed at a taco cart on the corner of South Temple and Main Street.

Brenda Valadez, from Puebla, Mexico, was attending general conference for the first time, and called the new destination "amazing." Her father, Roberto Valadez, said he liked the environment downtown.

"One of the paramount objectives was to try to instill a sense of economic confidence in investors (interested) in Salt Lake City, and that others would come forward (to) invest in jobs and homes in the downtown area," said H. David Burton, the Presiding Bishop of the church.

The $1.5 billion mixed-use project was developed by City Creek Reserve Inc. — a for-profit real estate company owned by the LDS Church. Church officials said one of the primary objectives of the project was to instill a sense of economic confidence in investors interested in Salt Lake City and create a vibrant downtown.

Utah Transit Authority police set up police tape and signs Saturday directing guests to "please use crosswalk" at the City Center TRAX stop, and officers in bright yellow vests directed pedestrians and vehicles on Main Street. Waiting to cross, Anthony Vidal of Las Vegas took pictures of his children with the Salt Lake City temple in the background.

"My brother-in-law works for the church and he told me how many jobs this created," he said. "It's nice to see a mall that's packed during a time when we have a recession."