At a rally just across the street from New Hampshire's gold-domed state Capitol, Huntsman told reporters he has to meet expectations in Tuesday's GOP primary election, the second test for the 2012 GOP candidates.

But the former Utah governor and U.S. ambassador to China stopped short of saying where he needs to finish among a field led by Mitt Romney, the leader of the 2002 Winter Olympics in Salt Lake City.

"Whatever the expectations are come tomorrow night, we'll have to clear that hurdle. I'm not sure what they're going to be," Huntsman said. He is closing in on second place in some polls.

"Our strategy moving forward is getting a head of steam out of New Hampshire," he said. "We've got to prove the point of electability here. This is why the New Hampshire primary is so important."

Huntsman has staked his 2012 presidential bid on a strong showing in New Hampshire, holding some 170 events here. He skipped last week's Iowa caucus vote and moved his headquarters from Florida to downtown Manchester, N.H.

Top Huntsman adviser John Weaver, who played a key role in Arizona Sen. John McCain's 2000 and 2008 presidential races, said the campaign is ready to head on to South Carolina for the Jan. 21 primary election.

Our strategy moving forward is getting a head of steam out of New Hampshire. We've got to prove the point of electability here. This is why the New Hampshire primary is so important.

"We already have our plane tickets purchased, so we plan to be in Columbia at 3 o'clock Wednesday," Weaver said. "I feel fantastic."

The campaign later released the details of Huntsman's appearances in South Carolina on Wednesday and Thursday, including town hall meetings in Columbia and Charleston, calling the events the kick off to Huntsman's "Country First" tour there.

Weaver said online contributions to the Huntsman campaign have tripled since his rise in the polls and the campaign reported raising $112,000 Sunday night. The new influx of money, Weaver said, has been used to pay for campaign commercials in New Hampshire and to buy ad time in South Carolina.

Barbara Morris said she'd be a contributor if she wasn't unemployed.

"I'm tapped out," said Morris, who was in sales and marketing before losing her job nearly a year ago. "If I could, I'd bring him a million dollars. That's how much I believe in him."

Morris said she'd been considering casting her vote for either Romney or former House Speaker Newt Gingrich, but then saw the recent debate where Romney criticized Huntsman for serving under a Democrat, President Barack Obama.

She said she believes her vote for Huntsman matters regardless of how well he does in Tuesday's election. "It's not about popularity, it's about policy," Morris said. 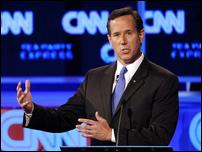 Judging from the presidential forums being held all over New Hampshire ahead of Tuesday's Republican primary, the biggest threats to America appear to be online piracy, an insidious United Nations and "crony capitalism."

"He's the only Republican who believes as I do as a scientist in climate change," Orff said. "I can't believe the other guys, when they're driving around New Hampshire, aren't looking out the window and saying, 'Where's the snow?'"

The morning rally attracted a small but enthusiastic crowd that included a number of high school students on a field trip from New York. Despite the bitter chill in the air, they chanted and waved bright red Huntsman signs.

Before ducking into a nearby store for one of a series of network TV interviews he gave throughout the day, Huntsman reminded the crowd not to take his new standing in the polls for granted.

"We are the underdog candidate," Huntsman said. "Do you know what that means?"

"We're going to win," someone yelled back.

Huntsman, though, was careful not to promise a victory in his response.

Jon Huntsman Jr. said Monday he wouldn't be running for president had he not served as governor of Utah.

"I wouldn't be doing this if it wasn't for the good people of Utah," Huntsman told KSL at a rally in the New Hampshire state capital.

It all happened there in Utah, and I wouldn't be doing this if not for experience and I'm grateful.

Huntsman was one of the state's most popular governors, overwhelmingly elected to a second term in 2008. He resigned the office the following year after being named U.S. ambassador to China.

"It all happened there in Utah, and I wouldn't be doing this if not for experience and I'm grateful."

• But during a day of campaign appearances around the state, Jon Huntsman Jr. suggested he could use a little more support in Utah.

A KSL reporter tried to get him to be specific about the result he needed to see in Tuesday's primary election to stay in the presidential race.

"Listen," Huntsman said with a smile as reporters from other media outlets leaned in to hear his answer. "If we were to get the endorsement of the Deseret News, that would do it for us."

Unfortunately for the candidate, the newspaper, owned by The Church of Jesus Christ of Latter-day Saints, doesn't make political endorsements.

"There's the hard work that he did throughout the summer and the fall," the adviser, John Weaver, said. "That's not sexy. That's not fun. It's kind of grinding it out so you have your organization in place."