PROMONTORY, Box Elder County — NASA's space shuttle program may have retired in July, but the hope of getting Americans into space again is backed by 3.6 million pounds of thrust that was tested Thursday on a remote hillside in Box Elder County.

With the equivalent of 22 million horsepower, the DM- 3's performance was measured at ATK's 22,000-acre facility for two minutes and six seconds — the time it takes for an actual launch.

The motor hits 5,000 degrees at ignition and is contained within a booster that is 150 feet long and 12 feet in diameter. At ignition, it blasted so hot it turned sand into glass at 2:05 p.m.

Its roar rumbled through the crowd of spectators standing a mile away, the force of the sound waves physically felt by witnesses.

It was a mostly quiet crowd that watched the test as it blasted gray billows of smoke in a steady stream into the sky, high above the rocket motor. But at its conclusion, when the last of the flames had disappeared, there was applause, smiles, sighs of relief and congratulatory handshakes.

If the test goes well, then we will be able to forego other development motors.

"That's what it's all about," exulted one ATK employee before dashing off into the crowd. Afterward, ATK officials said early data show the DM-3 could not have performed better, stoking hopes that its design has reached end stage of development and is flight ready.

Thursday's firing was the third in a series of development tests designed to measure the performance of the motor's components under certain conditions. All in all, it had 37 design objectives that were measured through 979 instrumentation panels — the most expansive test in ATK's history.

"It is an important day for NASA, ATK and Utah as well," said Jim Halsell, a former five-time shuttle astronaut and ATK's vice president of safety and mission assurance.

The first test performed on the five-stage motor was in September of 2009 under average temperature conditions followed by an August 2010 test in which the motor and solid propellant was cooled to 42 degrees. In contrast, the motor and propellant — all 1.6 million pounds of the solid fuel — were heated over time to just above 90 degrees for this test.

"We know it will burn slightly faster, slightly hotter and slightly quicker than the cold test did," Halsell said.

The differences — even if they are within one tenth of 1 percent — need to be understood and anticipated so design engineers can precisely predict performance.

"If the test goes well, then we will be able to forgo other development motors," and move onto the qualification stage, where the design is "frozen" and proven, Halsell said.

"You're looking at the motor that is ready to fly on whatever is next."

Although NASA retired its space shuttle program in July, ATK is among the U.S. companies jockeying to develop a commercial alternative that can safely ferry cargo – and people — to the International Space Station and other destinations. 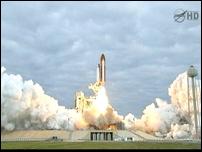 It was hard to escape a sense of history for Friday's launch of Space Shuttle Atlantis, 30 years of Utah playing a central role in the shuttle which is now on its last mission. Many would like to see a new life in the future for the Utah-made booster rockets.

"NASA and the administration, they're still studying the cost, studying the configuration, studying the timelines," Halsell said. "And ATK is moving forward with the tests to be ready when NASA's ready to move forward."

The company has partnered with Astrium in the development of the Liberty launch system, which could be ready for a test flight in 2013 and have cargo capability by 2016.

Multiple performance tests have allowed designers to decrease the amount of insulation by 1,500 pounds, but increase the amount of fuel, helping it to have more vertical thrust than anything out there, said Charles Precourt, ATK's vice president and general manager of the company's space launch systems.

Precourt said that thrust capability makes the motor ideal for a heavy lift vehicle — meaning it can carry more cargo or more weight farther than any rocket motor that exists today.

"Anything you can think of out there, the moon, asteroids, Mars, it could reach," said George Torres, ATK spokesman.

Among Thursday's spectators were a group of cadets from the U.S. Air Force Academy in Colorado Springs, Colo., — all from an astro-engineering background.

Capt. Uriah Tobey, their leader, said many in the group are budding astronauts who have long dreamed of carving out a career in space.

"This was inspiring today," he said. "I think it will further spark that ambition."

Written by Amy Joi O'Donoghue with contributions from John Hollenhorst.