'Book of Mormon' sweeps Tonys, but what's the big picture?

SALT LAKE CITY -- "The Book of Mormon" musical about young missionaries in Africa, has taken Broadway and the Tonys by storm. The critics are calling it irreverent, profane and funny but what's the big picture?

The Salt Lake Acting Company is preparing for another 'Saturday's Voyeur', where some of the actors have played Mormon missionaries for years.

"The LDS Church is now moving out of an adolescence," said actress Alexis Baigue. "Very uncomfortable and uncertain about who and what it is, is now able to say, 'yep, this is what we are.'" 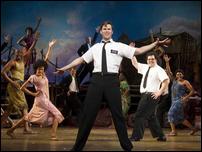 A slew of acclaimed shows were up for Tony Awards in a remarkably competitive year, but a production that wasn't even eligible still managed to cast a shadow _ well, shall we make that a web? _ over the proceedings.

For decades, the Salt Lake Acting Company has poked fun at politicians and Mormon culture. They think "The Book of Mormon" musical is a good thing.

Company member Cynthia Fleming talked about watching the Tonys and the musicals success. "I am so cool that I live in Salt Lake City, all the Mormons, so proud of that."

"It's actually kind of thrilling for me to go, wow, it really defied my expectations of anything that could sweep the nation," said company member John Rowland.

Fred Adams, the founder of the Utah Shakespeare Festival saw the show. He called the music great and the language horrible. But he believes, it will make people think, like the woman he met during intermission.

"She said, 'We have Mormons in Bristol, England,' and she said, 'do they go through this?'" said Adams. "And that couple is going back to Bristol, saying, 'you know, we're going to look at those boys on our main street a little differently now', so I don't think it's going to damage us."

Adams and others believe, the popular musical is a sign that the faith is now a very real part of the American fabric.

The Church of Jesus Christ of Latter-day Saints issued a statement about "The Book of Mormon" musical months ago.

"The production may attempt to entertain audiences for an evening, but the Book of Mormon as a volume of scripture will change people's lives forever by bringing them closer to Christ."