VERNAL — It's fair to say it was his cents of humor that brought Jason West to the attention of the coppers.

It's also fair to say that — despite the criminal charge he's now facing — the Vernal man wouldn't change what he did when he couldn't make heads or tails of a $25 billing dispute with his doctor's office.

Vernal police cited West with disorderly conduct on May 31, claiming he unnecessarily caused alarm when he unloaded 2,500 pennies onto a receptionist's counter at Basin Clinic to settle his bill five days earlier. Officers say the pennies were “strewn about the counter and the floor” and that West's actions “served no legitimate purpose.”

I would say that I had a legitimate purpose and it was to resolve a billing dispute and pay it and to protest how I'd been treated.

“I would say that I had a legitimate purpose and it was to resolve a billing dispute and pay it,” West said, “and to protest how I'd been treated.”

Basin Clinic has not responded to multiple requests for comment.

Vernal City has also refused to release the police officer's initial report for the incident — a record that is classified as “normally public” under the state Government Record Access and Management Act. Deputy recorder Roxanne Behunin said the city classifies police reports as “protected” if a person is charged with a crime “to guarantee a fair trial.”

West denies acting aggressively toward any clinic staffer, including the billing clerk he says refused to help him during the past month while he tried to resolve his questions about a $25 co-pay he claims he paid in December.

“I didn't at any time yell at them,” West said, referring to the May 27 visit that landed him in hot water. “I didn't go on a rant. I wasn't irate.”

West maintains that he calmly asked the billing clerk, “Do you take cash?” He was prepared to pay with his debit card, he said, but found out that wasn't necessary.

That's when West produced a large bowl containing about 13.8 pounds of loose pennies from a black plastic sack and poured it onto the top counter. Some of the coins, he acknowledges, spilled onto the desk below where the receptionist was seated and onto the floor.

That's just the nature of pennies. They're round.

“That's just the nature of pennies,” he said. “They're round.”

There were people in the waiting room who witnessed the incident, but West maintains that no one appeared to be upset by his actions.

“There was giggles and snickers and outright laughter,” he said.

West added that he never demanded that someone count out his penny payment. He did ask for a receipt and said he told the billing clerk, “I'm willing to wait if you want to count them so you can make sure you got every penny.”

West said the woman told the receptionist to write out a receipt and then told him she was calling the police to have him removed from the building. West wasn't there, however, when an officer arrived. 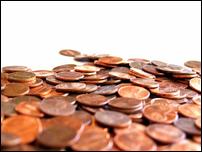 A Vernal man has been charged with disorderly conduct after police say he caused alarm when he paid for a disputed medical bill in pennies.

“The girl handed me my receipt, I had no more business with them and I left,” he said, noting that he lives about four blocks from the clinic and wasn't contacted by a police officer for about five hours.

By then, West was more than an hour away, heading to a Memorial Day weekend gathering with family. He offered to return to Vernal immediately to meet with the officer, but said he was told that wasn't necessary. He finally met with the officer May 31, the day he was cited.

West said he wasn't trying to harm anyone or cause alarm; he was only trying to show his frustration over the poor customer service he believes he received from the clinic's billing department, and do it in a humorous way.

“I did stand-up comedy in college,” he said. “This is how I deal with stress. I make jokes.”

“I recognize my place,” he said. “I recognize it's a court of law and I have respect for the legal process.”