SANDY, Utah (AP) - Real Salt Lake was hoping for a breakthrough. Monterrey had history on its side.

With a 1-0 victory Wednesday night over RSL, Monterrey claimed the CONCACAF Champions League title _ the sixth straight for a team from Mexico.

"It is satisfaction. It is joy," said Monterrey coach Victor Manuel Vucetich, 11-0 in championship finals across various leagues. "All are important, but this one comes with a special prize."

Monterrey qualified for the FIFA Club World Cup in December in Japan. It was Monterrey's first continental title in its 66-year history.

"It's going to be tough," said captain Kyle Beckerman, who was forced to sit out the game because of accumulated yellow cards. "Everybody in the locker room is pretty hurt right now. So it's going to take a lot for us to get back."

Real Salt Lake, meanwhile, can only ponder what might have been.

RSL was trying to become the first Major League Soccer team to advance to the Club World Cup in Japan, but came up empty in front of a sellout crowd of 20,378 at Rio Tinto Stadium

"I told our players if you fall asleep for one minute, this team can punish you," RSL coach Jason Kreis said.

That's what happened in stoppage time at the end of the first half on consecutive give-and-goes between Sergio Santana and Humberto Suazo. Santana avoided a defender and gave the ball back to Suazo, who was there to put the ball past goalkeeper Nick Rimando for the game's lone score.

Suazo, a Chilean international player, was a thorn in RSL's side during the first leg in Mexico. He gave Monterrey a 2-1 lead in the first game only to have Javier Morales tie it in the 89th minute.

This time Morales' had several late chances but couldn't convert.

"We couldn't get that last bounce," Kreis said.

But he said the key is to bounce back from the devastating loss. 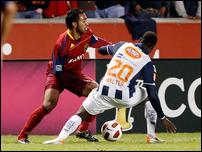 Despite loss to Monterrey, RSL has bright future

Since Real Salt Lake's inception in 2005, many, even avid soccer fans, have doubted that an American soccer team, especially in the suburban community of Sandy, Utah, could impact the future of MLS and American soccer in general.

"It's going to be tough," said captain Kyle Beckerman, who was forced to sit out the game because of accumulated yellow cards. "Everybody in the locker room is pretty hurt right now. So it's going to take a lot for us to get back."

Real seemingly had everything in its favor. RSL had a week to prepare for the game while Monterrey was playing its eighth game in 27 days. Plus, Real was riding a 37-game unbeaten streak at Rio Tinto, with its last loss coming 23 months earlier.

Monterrey would outlast RSL, which squandered early scoring chances and couldn't convert late even though a 1-1 tie would have been enough to advance because of the away goal advantage it earned in the first leg in Mexico.

"I'm pleased with what we did for 75 minutes," said Kreis, upset with the way his players possessed the ball between minutes 30-45. "It's a major, major disappointment. We'll see how we go on."

Neither team has much time to recover.

RSL returns to MLS action this weekend against Portland, and Monterrey returns to Mexico for its own league play.

"In the end, either team could have won," Vucetich said. "We were lucky we got the win."

(Copyright 2011 The Associated Press. All rights reserved. This material may not be published, broadcast, rewritten or redistributed.)