LAS VEGAS (AP) -- Brandon Davies is not just here in spirit for No. 8 BYU. He's here in person.

The sophomore center who was suspended for violating the school's honor code by reportedly having sex with his girlfriend accompanied his teammates to the Mountain West Conference tournament.

"He's as big a part of this team as anyone on this team," senior guard Jackson Emery said Wednesday after a workout that was witnessed by Davies. "He screwed up. We've all screwed up in our individual ways. But it's good to have him here. He's helped us get to this part of the year and it's a big confidence boost to know that he's on the bench supporting us and not somewhere else."

Cougars coach Dave Rose said bringing Davies along was the right thing to do.

There's not a message. This is about our team. We decided to bring him because we thought it would be good for both of us.

"I just think it's important for his teammates," Rose said. "There's not a message. This is about our team. We decided to bring him because we thought it would be good for both of us."

Rose said he's not decided, however, whether Davies would accompany the Cougars in the NCAA tournament.

"Yet to be determined," Rose said.

After his suspension, Davies didn't attend the Cougars' next game, a loss to New Mexico. But he was on the end of the bench in street clothes when the Cougars beat Wyoming to clinch a share of the conference crown and earn the top seed in this, their final MWC tournament before bolting to the West Coast Conference.

"It's great. He's been with us all year and even if he is not playing his presence is still there," junior Charles Abouo said. "He's a teammate, he's one of my best friends. Having him there against Wyoming, it was good to see him on the bench. We had all the familiar faces and it felt like our team was complete even if he wasn't on the court."

Jimmer Fredette, the nation's leading scorer, said it's comforting having Davies around "just because he's like a brother to us." 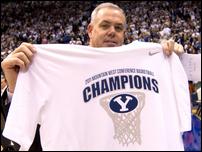 Starting the March Through March

"People make mistakes. That's what happens and you just move forward from it."

Davies' future at BYU and with the basketball program will be determined in the coming weeks, but his return to the team even in a limited capacity seems to indicate that both sides would be amenable to a reunion.

The Cougars (28-3) fell from third to eighth in the rankings after Davies' suspension a week ago. Against New Mexico, 6-foot-10 center James Anderson replaced Davies, but Rose started freshman Kyle Collinsworth against Wyoming, essentially going with a four-guard lineup in a 102-78 rout.

The Cougars see the conference tournament as a chance to work out the kinks, although it could also give opponents in the NCAA tournament fresh film to decipher their new look.

They've now had more than a week to adjust to life without Davies on the court, and Rose said he likes the way his team is responding to all the adversity.

"The practices have been great. Very competitive, I think our guys got a real sense of competitiveness to them," he said. "I really don't know if we all know how things are going to work but we do know that we have to get great play out of Jackson (Emery) and Jimmer, our two leaders. Charles (Abouo) has been terrific the last couple of games. We've got players there that probably just need to step up, and if Jackson and Jimmer can play well, I think we'll be fine."

Rose called this transition the toughest challenge of his career yet insisted, "I expect the team to find ways to win."

And he won't lobby for a higher seeding from the selection committee, either.

"We'll accept the challenge that they give us and go from there," Rose said.

Abouo said Davies, who has kept a low profile since his suspension, is doing well and that all those everyone chiming in on the issue one way or another should know "he's a great person. Really humble person, really nice person."

"He'll do anything for anyone," Abouo said. "It's almost to a fault how nice he is. He's a really good guy, everybody loves him. He's one of my best friends. It's unfortunate what happened. Despite all this he still has a positive attitude. He's really excited to be down here with the team."

Even without Davies and fellow post player Chris Collinsworth, who blew out a knee in January, the Cougars insist their designs on a deep NCAA run hasn't changed.

"Yeah, there's some skeptics out there," Abouo said. "We still have a really deep team. It's been like that all year. We're still the same group, regardless of which individual is out we're really confident."

Sure, they'd rather have Davies in a tank top and gym shorts than a shirt and tie, but the Cougars are starting to think they might have an advantage in their sudden switch to different looks.

Abouo said there's not much drop-off with Kyle Collinsworth getting Davies' minutes and giving the Cougars another ball-handler who can corral a rebound and zip upcourt.

"It can be harder for teams to match up against that," he said.

"It's brought us more together," he said. "We've always been a unified team. This is one of the best teams as far as friends. It's been a tough emotional part for all of us in certain ways, we've all stuck by each other, supported each other. That's what we're going to need to do in order to advance."

(Copyright 2011 by The Associated Press. All Rights Reserved.)