Several Utah legislators have been watching with interest as their Wisconsin peers enter the second week of a standoff over a bill that would strip most collective bargaining rights from nearly all public employees. 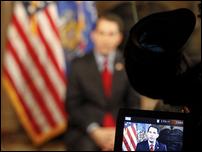 With their Senate colleagues still in hiding, Democrats in the Wisconsin Assembly began introducing a barrage of 100 amendments Tuesday to try to stymie the Republican governor's plan to strip unionized public employees of most of their bargaining rights.

Republican Gov. Scott Walker's plan to help plug a projected $3.5 billion budget shortfall has resulted in eight days of protests in Wisconsin — including one Saturday that drew 68,000 people, according to the Associated Press. Fourteen Senate Democrats left the Wisconsin Capitol on Thursday to delay a vote on the bill and have yet to return.

A few dozen Utahns gathered at the state Capitol on Tuesday afternoon as a show of support for the union workers in Wisconsin.

"Our big concern, as we stand with those public employees in Wisconsin, is Gov. Walker is looking to balance the budget on the backs of public employees there," said Jim Judd, president of the Utah AFL-CIO and organizer of the rally.

What needs to happen in Wisconsin, Judd says, is a healthy dialogue in which management and labor get together and find solutions to problems.

"We've been successful at doing that in Utah, and we anticipate that that will continue," he said.

Recent budget woes in Utah at the state, county and city levels have required public employees to make concessions, Judd said. In most cases, he said, that has been done with "a cooperative spirit."

"We've kept that dialogue moving back and forth, and we've been able to work through some of those difficult budget times," Judd said. "Hopefully we'll see improving times ahead where some of those concessions can be put back into place to compensate those employees who sacrificed to balance the budget."

On Tuesday, Sens. Lyle Hillyard, R-Logan, and Scott Jenkins, R-Plain City, both credited efforts a year ago by Sen. Dan Liljenquist, R-Bountiful, to overhaul the state retirement system as the type of responsible action that has helped Utah head off problems now faced in other states, including Wisconsin.

"They were pretty dramatic (changes)," Hillyard said. "We were careful to protect vested interest but change it for the future. We knew if we didn't do that, we'd have a serious problem."

Another example of that was the body of work in recent years by Rep. Dave Clark, R-Santa Clara, to address problems with health insurance, Hillyard said.

"I can't imagine after what we've done already that there's anything else on the forefront that would lead to that kind of response," Hillyard said.

Ron Bigelow, Utah's budget director and a former state lawmaker, said the governor and legislators have done a good job reacting to the economic downturn in recent years "to keep relative balance in how much we were spending."

Wisconsin is trying to follow that example, he said, "and it's a very difficult road to go down."

"We had the same struggles and discussion here, on a little smaller scale, but the same issues," Bigelow said. "They are issues that states must deal with to remain viable for a long period of time."

Because Utah is a right-to-work state, unions don't play as great as of role as they do in Wisconsin, he said. But the main difference between what's happening in Wisconsin and Utah's handling of such issues is stakeholders' willingness to sit down and talk.

"That's what's so great about this state: People will try to work together," Bigelow said. "They may disagree and have different philosophies, but they're willing to work together for the best (interest) of the state of Utah."