"When he starts to shoot from 40 feet out you know he's feeling something," Cougars teammate Jackson Emery said of Fredette, who hit a 40-foot buzzer-beater before halftime and a few other 3s that would have been good down the street where the Utah Jazz play. "You kind of wanted to keep giving him the ball."

The BYU fans who made the 50-mile drive from Provo wanted 50 from the preseason All-America guard, and chanted his name when coach Dave Rose pulled him from the game with 5:44 left.

While Rose insisted he didn't know how many points Fredette had, Fredette did.

"Of course. I won't lie to you," Fredette said when asked if he wanted 50. "It was Coach's decision. The most important thing is that we won. It was a great night anyway."

The game was BYU's last at Utah as members of the Mountain West Conference. Utah jumps to the Pac-12 next year and the Cougars move to the West Coast Conference.

"Tonight was very similar to the game at Arizona," Rose said. "(Fredette) still had six assists. He was still sharing the ball. He didn't force a lot of things, but he got himself good looks and converted on them."

The buzzer-beater gave Fredette 32 points in the first half and moved him past BYU great Danny Ainge in career 30-point games with 13. He trails only Michael Smith and Devin Durant, who had 17 apiece to top the Cougar record books.

Ainge's 30-year-old steals record would fall at the 12:47 mark of the first half when Emery grabbed the ball from Utah freshman J.J. O'Brien then passed ahead to Fredette for a layup. 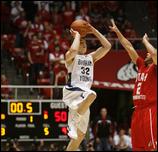 Emery had two steals Tuesday and has 197.

"It feels good to finally get that," said Emery, who finished with 20 points and hit 5 of 7 3-pointers.

"That last one seems to have been the hardest one," Rose said of the steals record. "I'm happy it's over and he won't get asked about it any more."

Utah (7-10, 0-3) came out determined to match BYU's intensity in an attempt to halt a six-game losing streak.

A 3 by Emery pulled BYU within 23-22, and Fredette hit consecutive shots from beyond the arc for a 28-25 BYU lead.

"I just felt good right from the beginning," said Fredette, who scored 39 points in a win at UNLV last week. "I felt like I was able to use the screen effectively and get into the lane and make some shots. Then the basket got a little bigger, especially in that first half. It was just one of those special nights that you have, that our team had, something we'll never forget."

BYU has won four straight and eight of the last nine against Utah. The Cougars have won seven straight this season.

Will Clyburn, who led Utah with 23 points, couldn't argue.

"Some of those shots we really couldn't do anything about," he said. "We're looking forward to the next game at their place. We're going to get them."

The Utes, who outrebounded BYU 45-30, need to finish stronger.

Clyburn pulled Utah within 63-53 with a layup with 12:26 remaining, and two free throws by Josh Watkins, who had 19 points, cut it to nine points with 11:40 remaining.

But Noah Hartsock hit consecutive 3-pointers to give Utah a 72-57 lead with 10:12 left and the Cougars never looked back.

"It feels good," said Fredette, who high-fived fans and hugged family members afterward. "That's what you want to do as a basketball player. You want to kill your opponent."

(Copyright 2011 by The Associated Press. All Rights Reserved.)