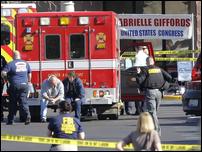 Some believe the angry political climate in recent years may have helped spark Saturday's attack on an Arizona congresswoman, but a big security overhaul for politicians seems unlikely.

SALT LAKE CITY -- The Arizona shooting that left six people dead and more than a dozen wounded, including Congresswoman Gabrielle Giffords, has raised security concerns ahead of this year's legislative session in Utah.

Aside from the governor, the state provides no elected state official with security detail. That means unless an official pays for their own security, they are left without protection.

The Utah Department of Public Safety monitors threats to officials and government buildings. The department's commissioner, Lance Davenport, says in light of Saturday's shooting, officers will be extra cautious during the 2011 legislative session.

Davenport says the department assesses the security risk on a daily basis. However, he did not say whether or not security would be enhanced during the session.