SALT LAKE CITY (AP) -- Forget that the Utah Jazz had upset Miami on the road 29 days earlier with a huge comeback.

This was a much-improved version of the Heat, even if the personnel was the same. "You could tell they had a chip on their shoulder coming into this game," Jazz forward Paul Millsap said.

LeBron James scored 33 points, Dwyane Wade added 28 and the surging Heat extended their winning streak to six games by outscoring Utah by 14 in the fourth quarter for a 111-98 victory Wednesday night.

Utah couldn't stop the pick-and-roll. And when Jazz defenders helped inside, Chris Bosh or Zydrunas Ilgauskas knocked down outside shots.

"It was kind of pick your poison," Utah guard Deron Williams said. "It was just tough to defend."

"Right now every win is significant," said James, who once again got an earful from the crowd. "When you go into a building like this, a hostile environment with a team that's very good, great in this building, it's always good to get a win like this."

Al Jefferson scored 25 points and all five Jazz starters were in double figures by the start of the fourth. But it wasn't enough as the Heat pulled away with a 12-3 run to start the quarter.

"We were pretty much playing uphill the whole game," said Williams, who finished with 21 points but had only four in the first half. 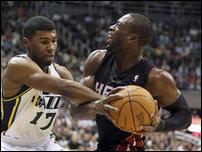 The Miami Heat walked out of the EnergySolutions Arena with a vengeful 111-98 win as Utah found itself drowning in uncharacteristic doses of inefficiency.

Miami led by as many as 12 early, but the Heat found themselves trailing 78-77 entering the fourth after the Jazz mounted yet another rally. Last month, they came back from a 22-point deficit to beat the Heat.

In that game, Millsap scored a career-high 46 for Utah. This time, he got going late and finished with 18 points on 9-of-12 shooting.

Williams blamed himself for not getting the guy with the hot hand, Jefferson, the ball late.

But he also credited the Heat.

"It's a different team than we saw a month ago, and we knew that coming in," Williams said. "They had a game plan and executed it."

The loss continued an up-and-down season for the Jazz, who were riding a seven-game winning streak last week but lost Friday to Dallas.

Williams seemed more concerned about Utah's home record, which is 9-5. The Jazz lost only nine games at home last season. "If you would have told me before the season that we would be a better road team (7-2) than a home team, I would have laughed at you," Williams said. "Hopefully we get it going."

Millsap tried to spark the Jazz again Wednesday. He grabbed the rebound off James Jones' miss and raced the length of the court for a layup at the buzzer to pull the Jazz within 28-27 to end the first quarter.

A three-point play by Andrei Kirilenko pulled the Jazz to 66-64 with 6:18 left in the third. Williams then passed underneath to Millsap for a dunk to tie it at 72 with 4:15 left, and Raja Bell put Utah ahead with a pair of free throws.

But the fourth quarter was all Miami, with the Heat hitting five of nine 3-pointers and again winning the battle on the boards.

"The biggest thing is rebounding," said Ilgauskas, who had his first double-double of the season with 16 points and 10 boards.

"We're winning all the rebounding battles game after game after game. Before we were not. We have the same guys, but we're doing it with more effort, doing it collectively."

"We started to click," Ilgauskas said. "We're playing better basketball. If you look at the games, it's obvious. But we still have a ways to go."

So does Utah, which has lost two of three. The Jazz had held their previous 10 opponents under 100 points, and they were 10-0 when entering the fourth with a lead until Wednesday.

"I thought Miami was more physical than we were," coach Jerry Sloan said. "It looked at times like we were intimidated (by James) and Wade. I wish we would have got up and after (James) like they were getting after us."

NOTES: Utah C Kyrylo Fesenko did not dress because of a sprained left ankle and remains in a walking boot. ... Bell (strained groin) and Kirilenko (strained quad) are day-to-day. ... Williams didn't attempt his first shot until there was 8:32 left in the second quarter. ... Utah's bench was outscored 20-10.