HILL AIR FORCE BASE -- An herbal incense used to create a marijuana-like high has been banned for some time by the U.S. Air Force, but arrest numbers show some airmen at Hill Air Force Base still are using spice. 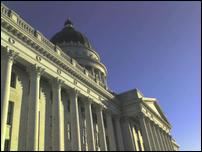 A Utah lawmaker working on a statewide ban of spice is now revealing more details about his bill.

The Air Force has long said intoxicating substances like spice are illegal for use by airmen. Last year it reinforced that by specifically saying spice is illegal among the ranks.

The Standard-Examiner reports since the beginning of last year, 17 active-duty airmen were punished for using spice or another mind-altering herbal incense. The punishment for using spice ranges from a letter of reprimand to a dishonorable discharge or two years of confinement.

The Air Force code does not ban civilians from using spice on base.