"Overall fish are tapping into an abundant resource and trying to prepare for winter," says Roger Wilson, sport fish coordinator for the Utah Division of Wildlife Resources.

Whether pursuing cold water fish like brook trout and arctic grayling, or hoping for one more trophy smallmouth bass or walleye, fall is the prime time to be on the water. 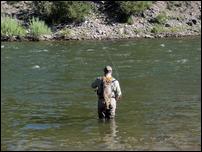 The state Division of Wildlife Resources is floating a plan to hike license fees by 2013 to raise money to pay private property owners to open many of Utah's streams.

"One of the reasons I like fishing in the fall is that the weather is more predictable," offers Drew Cushing, warm water sport fish coordinator for the Division. "You don't have the high winds or the surprise thunderstorms. Those things throw fishing off."

Cooler weather begins the cavalcade of fantastic fall fishing. Air temperatures drop from the high 90s to the 70s and even the mid-60s. That creates cooler surface temperatures on the water and helps to reinvigorate forage and oxygen regeneration.

"Now through the end of October the warm water fishing is going to get really good," Cushing said.

He also believes that fish can sense when the seasons change and prepare for colder weather and frozen lakes. "They really have a limited time left in the year to put in groceries, get fat stored, so they're trying to work on putting on as much fat as they can," he said.

Cool water fish like walleye, yellow perch and smallmouth bass are most active when water temperatures are in the mid-60s.

"That means fishing is good in the spring and settles down in the summer only to pick up again in the fall. Walleye come back into shallow water and begin feeding again, which makes those fish more susceptible this time of year," Cushing said. "The best walleye and perch fishing here in Utah are between October and early November and even up to and right before ice on."

For most anglers the real payoff is a shot at bigger fish. Cooler water temperatures bring the larger fish back into the shallows to troll for something to eat. Because they are nearer the surface, they are more likely to encounter a well-placed lure cast where it will do the most good.

Many anglers have reported catching larger fish, upwards of 20 inches and over two pounds. During the summer they were lucky to hook into a catchable sized trout or panfish.

Another concept of improved fishing success during fall is forage competition. Here in Utah both the threadfin shad and gizzard shad are a prime forage base for striped bass at Lake Powell and wipers at Willard Bay. A wiper is a cross between a striped bass and a white bass. By fall, the shad are typically too big for most predators. At Willard Bay, wipers can no longer forage on the massive population of larger gizzard shad. Anglers benefit because now wipers must look elsewhere for food.

Walleye experience the same shortcoming with yellow perch as their forage base grows. Perch grow at an alarming rate their first year. They soon outgrow even the most aggressive initiatives from their nemesis. Come spring both the shad and yellow perch will meet their match, but for now they can swim shallows with near immunity. Anglers casting fish imitation lures can take up the slack.

Because water temperatures are at optimum levels for bass, walleye and trout, these fish are still growing, perhaps at rates not seen all summer long. Food demand is high and food selection is low. Certain tackle and techniques employed now during the changing of the seasons will help ensure more big fish on the line.

Cushing suggests switching from fast fishing and reaction baits to a slower presentation and more natural imitations. "As forage becomes more limited I slow down and use soft plastic jigs and grubs, top water baits in the morning, or live bait," he said.

Wilson adds that for trout, move away from summertime baits and switch to simple fly patterns. The action is more satisfying, too.

"Fly fishing really comes on in the fall. Troll a monofilament casting rod with one split shot and a fly. You can have 50-fish days with that technique," he said.

Wilson warns, though, that such success may be limited to smaller fish, but the action is unbeatable. The bigger fish are going after other smaller fish so a crankbait or tube jig would probably work better.

"The great thing about the fall is that it is such an extended good fishing period. You just can't miss," Wilson said.

Just because it is still pushing 90 degrees and above in the valley, fish residing in the high country around 10,000 feet are already beginning to think about winter and ice up. Adjust your techniques and patterns accordingly.