Ground video of the wildfire

SALT LAKE COUNTY -- Firefighters and Utah Highway Patrol troopers had their hands full Tuesday with a blaze that spread quickly because of high winds. It jumped Interstate 80 and closed all freeways in the area. The roads now have reopened.

The Unified Fire Authority believes a welder working on the Union Pacific Railroad might have sparked the fire, and once it latched onto the brush, the winds carried it fast.

"This has been a very difficult fire for us because of the weather conditions," UFA Capt. Clint Smith said.

The changing winds and warm temperatures challenged firefighters all afternoon. Tall flames reached over I-80, forcing troopers to shut it down, along with state Road 201.

"We've had a lot of smoke, and those large flames burning through that grassland; and all that smoke was drifting across the roadways and making travel very treacherous," Smith said.

A few hours into the fight, firefighters got a break.

Traffic was at a standstill for anyone trying to drive west into Tooele.

"Part of delay on both roads was we had some power poles [that] caught on fire and fell across the road, and they had to be removed," explained UHP Sgt. Kellie Oaks. 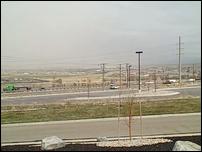 All that dust in the air may not be as bad for you as a winter inversion, but the Division of Air Quality says it's enough to cause problems for people with respiratory issues.

While motorists waited patiently, the fire marched on, consuming a Kennecott structure, a cell phone tower and at least three storage buildings at the Great Salt Lake Marina.

"There were two maintenance buildings that we store equipment in for maintenance ... I had a small boat in one of them and an ATV," said Great Salt Lake State Marina Park manager Bob Rosell.

He said none of the boats at the marina were damaged, and he believes boat owners will be able to inspect their water crafts sometime Wednesday. Still, he doesn't know when the park can open for the public.

"A lot of the power lines burned down along I-80, so we have no power," Rosell said.

Between 10 and 15 people were evacuated from the park about an hour before the flames started spreading in their direction.

Eventually, word spread that someone might have sparked the fire with a tool.

"Throughout the course of the day, we found there had been some welding done on Pacific Railroad property, and that possibly caused the fire," Oaks said.

The fire took many people by surprise, but luckily no one was injured. Only material items were damaged, and those you can replace.

KSL News did hear about one trooper who had his eye scratched by debris. He was checked out then released.

Meanwhile, the winds also caused problems in Sardine Canyon. An empty semi was blown over, forcing the closure of southbound lanes while crews cleared the scene. The canyon is now open, but high-profile vehicles should still use caution through the area.